Vaccination is about genocide – ENGLISH SUBTITLES

Listen to Finnish MP Ano Turtiainen, representing the VKK (Power Belongs to the People Party), as he speaks words of truth in the parliamentary hearing of the temporary Law of infectious diseases on 20th December 2021. He firmly states that it might indeed take a full collapse of Finnish health care system before the members of Parliament realise the insanity of mandatory vaccinations pushed on all health care and social service workers. He also quoted the Bible and Jesus who said He never knew the workers of lawlessness.

Here is the full speech in writing:

“Honorable Chairman and dear colleagues. In the beginning of this year, I made an initiative for action, and I handed it in for the parliament to process on February 2nd. I suggested in it, that the government would begin a clarifying process regarding the Law of infectious diseases and more specifically its 48th §, so that it would no longer enable mandatory vaccinations to citizens and health care workers, nor based on any other law, such as Emergency Preparedness Act.

So, to be clear, it has been over 10 months since that initiative and only two weeks ago it was being processed in conjunction with the insane mandatory vaccination proposal, made by our government. The Social and Health Care Committee naturally turned down my initiative – what else was there to be expected, since all members of the Committee have been lobbying for these injections.

Which is why I propose that the Parliament approves my initiative for action from May 2021.

Neither did The Committee on Constitutional Affairs see any issues in the bill of the government. So, even the members of the most important Committee in this house think that vaccinating social and health care workers by force is merely a walkthrough. I must ask each one of you promoting these vaccines: why haven’t you supported my proposals, in which I have demanded analysis of the contents of these injections? Why? Why on earth?

Dear colleagues. I have been wondering, when does the current insanity end and what will be the one thing that would make it stop. Have you been wondering the same thing? It might be that our entire health care system will crash, and it might very well happen right now if you accept this proposal. And it might be good that way. Maybe it will force you to act since you seem to lack understanding – this became clear to me while I listened to your speeches earlier today.

In addition to this, you are already so deep within the corruption of this country, that there is no return to the path of truth, until you fully open your hearts to good and thus rip yourselves free from everything you’re currently representing. If you don’t begin to respect the Constitution again, the day is closer than you believe, that the people will take back the power that belongs to them. You will not direct this nation by force. No one is to follow unconstitutional laws and orders, of which today’s bill is a flagrant example.

Two weeks ago, I said the word ’genocide’ in this Hall and many of you found that hair-raising. But what else is it, if people are being forcefully vaccinated and simultaneously hospitals are full of patients suffering from adverse reactions and sky-rocketing mortality rates fill the morgues? Tell me, all of you appalled ones, what else is it then? I guess that it won’t be long before those guilty of genocide and treason will flee this country. We’ve seen the rise of lawlessness in Finland since the con men of the 1980’s, which was the time our Constitution was first stepped on. Dear colleagues, you are only proceeding with this illegal hustle. You’ve taken the worshipping of your idols to a level, where you even try to walk over the Laws of God. That is why the love in most of you has grown cold. The words of Jesus fit well to this moment: ”I never knew you, depart from me, you workers of lawlessness.”

Honorable Chairman. In the midst of all this lawlessness I still wish you a very merry Christmas and may God bless you all. Thank you.” 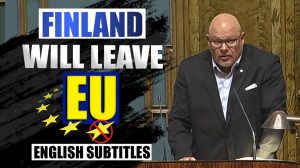 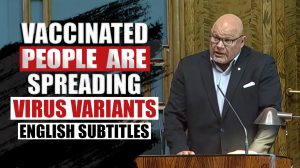 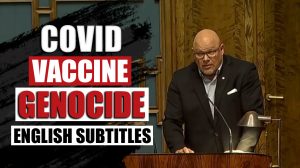